Last weekend I was invited to a charity event for kids… the Harley Davidson Blanket Run. As an avid motorcycle enthusiast and Harley Davidson nut-bag, I have never done a bike run before. I’m not entirely sure of what I expected and oh man was I about to be flabbergasted.

I was invited to join by a friend of mine who initially told me that it would be five or six of us riding together; turned out to be a little bit more than that. Ever the eager beaver, I arrived at Hard Rock Café in Menlyn, bright and early (ok so I was the first guy there), expecting to meet up with my five or six companions, strap on our woolly blankets and hit the road for a chill Sunday cruise. As the big hand did its clockwise shuffle, more and more Harleys started showing up. The five or six that I expected very quickly became close to a hundred roaring, glinting, mechanical beasts. Feeling nervous about this larger than the expected entourage of metal, I kept my cool (as one does in this situation) and tried to find out exactly what I’m getting myself into. 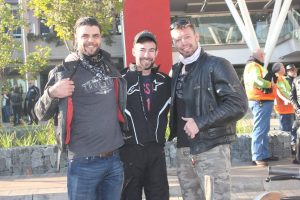 Nine o’clock came rolling on and it was time to saddle up for a ride I would never forget. The hundred or so Harleys (and me) hit the road to a meeting point where we would join another chapter of Harleys. The unexpected, and terrifying news just gets better and better yet at this point, my excitement was about as visible as a teenager at a Justin Bieber concert… all attempts at acting cool were now out the window and replaced with gawking amazement!

Eventually, the Johannesburg chapter showed up and my idea of a lot of motorcycles was now thoroughly smashed. We stood, bikes idling, for a solid 20 minutes as Harley for Harley passed us by. and eventually, we could open up and we joined this massive group of riders. The route took us on the N1 highway toward Sandton’s Nelson Mandela square. I finally got an accurate idea of how many motorcycles there was when I realised that the whole N1 highway to Joburg was closed off to the public and to cars…on a freakin Saturday! 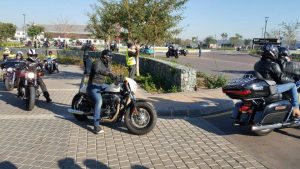 Someone later told me that all the bikes stretched eight kilometres front to end. Finally, we arrived at Nelson Mandela Square, and whoever allocated the basement parking to roughly two thousand motorcycles, had a sick sense of humour. What I mean is, it was loud… VERY LOUD! Tyre smoke was all to be seen as burning out after burnout was in order. Hard Rock Café Sandton accommodated everyone with a smile and efficiency and I believe that they collected close to half a million for charity. Well done to all involved!

5 Things to consider before getting a finger tattoo

The Low Down On Cover-up Tattoos

Tattoo Story: For the love of ink