Tattoo Story: For the love of ink

Whether it’s in memory of a loved one, an expression of creativity or an attempt to cover up a drunken mistake, there are tons of reasons why people choose to get tattoos. There are even ‘tattoo collectors’, who collect tattoos like art and turn their bodies into a kind of art gallery that lives on forever.  But who says you need a reason to get inked? Juwariya Ismail,

affectionately known around the shop as Joey, got her first tattoo when she was just 18, marking the start of her love affair with the art of tattoos for no reason other than doing what she likes.

“In the beginning, I got tattoos of things that were meaningful to me,” she says, pointing to a chess piece on her lower forearm done by a previous artist. “After a while, you worry less about the meaning and just go for tattoos of things that you love and enjoy. I like art, stuff that’s weird and different, so now I get what I like.”

Joey has had considerable work done on her arms and the rest of her body since her first visit in 201X, including intricate murals of Napoleon Dynamite and Jon Snow from Game of Thrones, as well as impressively intricate designs of her favourite rappers, Capital Steez and Joey Bada$$ (which took Marcel, one of True Blue’s resident artists, just one hour to complete!)

But Joey doesn’t plan on stopping there, and hopes to complete both sleeves by next year. Working in a corporate environment and coming from an conservative  Arab family, however, Joey feels relatively limited in how far she can go with her tattoos. Her tattoos end just above her wrists, allowing her to easily cover them up with a long-sleeved blouse when she needs to, but on weekends and after hours, she displays them proudly, and also admits to getting some interesting reactions from strangers. “I don’t really care what people think

, but people do tend to stare and give me funny looks when I go out, which is natural I guess,” she says.“Some people, especially older people, look a little freaked out, while others seem to be more intrigued than anything, and often come up to me and ask about my tattoos, so it’s not always a bad reaction.”

Joey says she would like to tattoo her entire body, and would even consider getting her hands, neck and face tattooed if it wasn’t for her job. For the time being, however, she’s hoping to get a full back tattoo done and take it from there. According to Joey, being able to work with a tattoo artist like Marcel Backer, who understands her vision and is capable of pulling off exactly what she’s looking for, makes a world of difference. Being able to come in with just an idea or a picture is really important, she says, especially when the work you want done hasn’t been done before. 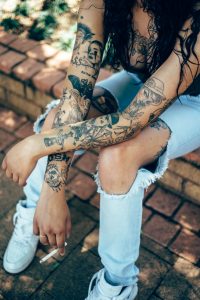 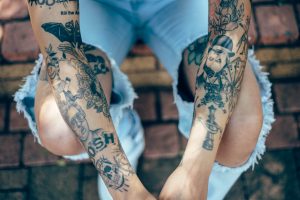 According to Joey, being able to work with a tattoo artist like Marcel Backer, who understands her vision and is capable of pulling off exactly what she’s looking for, makes a world of difference. Being able to come in with just an idea or a picture is really important, she says, especially when the work you want done hasn’t been done before.

Louis Potgieter, co-owner along with his wife Meghan Ann says “building that bond between client and tattoo artist is how the best tattoos are born. We spend hours in each other’s personal space, and more than being able to understand how the other person thinks, it’s really important for both artist and client to be absolutely comfortable with the other person, to make that situation work.”

“Tattoo artistry can become a little mundane, especially when you’ve had a few clients come in asking for those dime-a-dozen mainstream designs, but we love working with Joey. The trust is there, and because of that we’re inspired to explore and transcend creative bounds to produce tattoos that are truly memorable and unique.”

Tattoos are a form of art, and like so many other ink lovers, Joey does it for the love of all things quirky and unusual. Check out some of her awesome tattoos below… 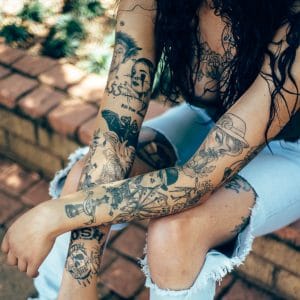 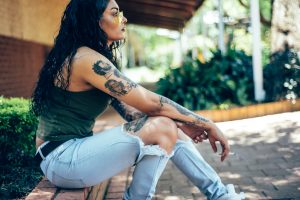 5 Things to consider before getting a finger tattoo

The Low Down On Cover-up Tattoos

Tattoo Story: It Doesn’t Always Have To Mean Something